The museum property includes the collections exhibited in the “Bürgerspital”, the weapons, works of art and a Biedermeier style room in the historical city hall (“Puntschert-Zimmer”).

The Retz Museum was officially founded as “The antiquity chamber of the city of Retz” in 1833 by the reform of the former “City Armory” (History of the Museum) and is one of the oldest museums in Austria.

The elaborate collection contains predominantly objects from the middle-class small-town culture.  The armory collection, the collection of musical instruments (Liszt grand piano) and the historical gold bonnets as well as the collection of portraits of the citizens from the 17th century on are of special interest.

The objects of the collections are in local and regional context and are within a range of time from the 16th century into the 20th century: the main focus point being the 19th century.

At the moment the collection is being inventoried by Mag. Helene Schrolmberger.

The history of the collection of prehistorical findings in Retz

It is no longer possible to determine who the first person was to discover archaeological findings for the Retz Museum. According to the information from Goldgruber, who worked for the museum as of 1886, there were no  prehistoric findings beyond a few mammoth bones. The first known archaeological findings were in 1870 in the process of building the Northwest train. Although the discovered jars and bones were discarded, the interest in archaeology was awakened.

In 1872 the legendary “Gupferte Berg”  in Unternalb  was dug into after  the encouragement of  town clerk Puntschert.  But they didn’t dig up richly  endowed grave sites, but the relics of a hausberg from the middle ages ( a wooden fortification). On the plot of the former brick kiln (Schwach) southeast of the town of Retz) there was an excavation led by the painter(?) and correspondent of the k&k central committee for the care and preservation ofhistorical monuments, Ignaz Spöttl, in 1889. On the place where the Volksschule teacher, Herbert Zwirner, discovered some findings, he was able to discover graves from the Hallstatt period and storage ditches from the late Neolithic period and Hallstatt period. None of these things from the early researches landed in the Retz Museum. The extensive collection of archaeological findings from the area around Retz owned by the Unterretzbach teacher, Ludwig Matula, were not brought to the Retz Museum. They were sold to the Hollabrunn Museum in 1927.

The first archaeological objects were probably bought by the Retz Museum between 1886 and 1890. Unfortunately no kind of contemporary records have turned up. When the mayor and merchant, Alois Richter, supported by teacher, Hubert Zwirner, took over the management of the museum (the former antiquity chamber), a large number of archaeological findings were bought or borrowed in 1890. Under the management of the mayor and wine merchant,  Karl Mößmer (1907/13-1934), further objects of interest were excavated for the museum and  that which was by then a strongly growing archaeological inventory was ordered, dated and catalogued by Dr. Leonard Franz in 1926. During the time teacher, Alexander Sackl was curator of the museum (as of 1934) there were further archaeological sites discovered such as the Germanic settlement remains on Galgenberg and the Early Bronze Age and traces of a settlement and graves in Unternalb. The excavations done partly by Sackl and  partly by Dr. Beninger dealt with the western part of the brick manufacture Schwach. The latest research go back predominantly to the archaeologist Hubert Nutz, who grew up in Retz and who led the excavation of the “Althof” in 1988/89 and to the bone house of the Retz parish in 1990. His dissertation revolved around the prehistorical and the early historical findings from the lake area of Retz.

Since there is no budget available for the restoration, we would be thankful for sponsors ready to take over the costs of restoration for these objects.

The knives and rings from the Hallstatt Age were in need of restoration. Archaeologiest Lukas J. Kerbler and Ludwig Nendwich, who financed the restoration, are very pleased with the successful results. 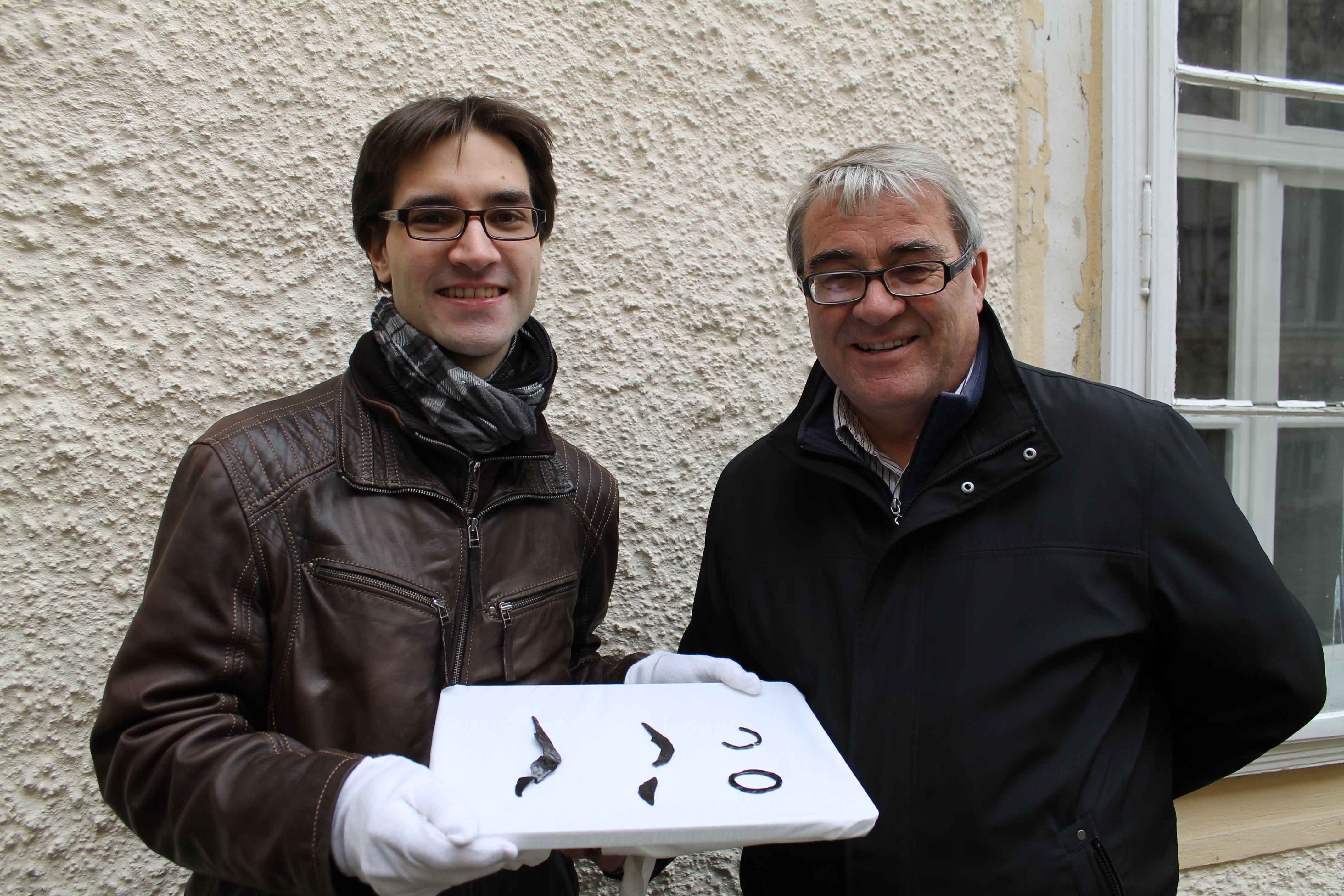